I arrived at USNA as a 21-year-old transplant.  I paid for polytechnic college in California on my own, but when Congress changed the law allowing women to fly in combat, I jumped at the chance to transfer.  I wanted to be part of an institution that did not have a glass ceiling, but I found that I was, and still am, part of the group that is breaking ground.  I am grateful to the women who paved the way.  All the women who came after them learned from watching their “elders.”  Many women kept their heads down while they proved their worth in the male-dominated environment.  Many women struggled with being simultaneously tough and feminine.  I was one of those women, emulating what I saw before me.

During my first year at the academy, I wished that I had a family that thought being a varsity athlete was worth something.  It seemed the workouts, meals and study regimens were set for those that were part of a sport.  Those of us not part of a team were left to our own devices – the intramural warriors. Plebe year, those “devices” included full fat meals, minimal fruits and vegetables, and the cannonball run celebrating the ability to gorge and run for redemption.  I gained so much weight that year that I requested special permission to get up prior to reveille to run an inner or an outer loop just to keep the weight off. 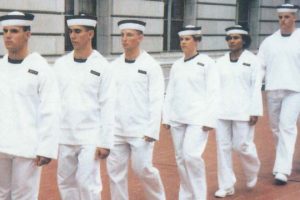 King Hall based meal and nutrition planning on an 18-year-old, male diet.  Many of those young men were still growing up, before they grew out.  There were a few nutritionists on staff for the Brigade, but visiting them gave you a special request chit to receive non-fat milk and little else.  An average plebe was lucky to be allowed the ability to eat, let alone eat nutritious proportions and ingredients.

Youngster year I taught aerobics, as I had done prior to joining the Navy.  I served the category five students, those who did not pass their PFA (BCA or PRT). Like present-day FEP, we mustered five days a week to PT prior to reveille.  What I could not get through to the program managers, though, is that all of these students were athletes.  They PT’ed the crap out of my Marine Corps Company Officer who joined us one morning to see for himself.  They were fit and religious in their workout, but they needed better nutrition.  You can’t out run (PT) your fork.

Since women matured faster than men, there was a propensity for women to be a larger population percentage than men in my category five class.  The “unusually big asses” mentioned in Jeannette Gaudry Haynie’s WUBA article were not a product of fitness, care or desire.  Midshipmen lacked nutrition education and healthy food choices in King Hall. After Plebe year, women tended to receive scrutiny about their weight because 1) they were not PT’ing in the hallways as they chopped from room to room and 2) their uniforms, fit to an 18-year-old woman after the most exhausting summer she has yet experienced, were now too small to let out the seams. Layer on to this equation 3) the tucked-in uniform style, synched by a belt, with poorly designed pant pockets.  Very few women could look their best whether in winter working blues or, maybe especially, in summer whites. 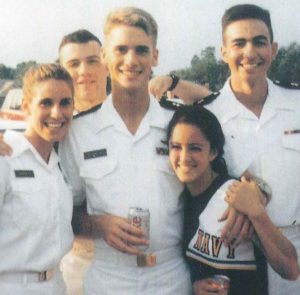 Stress, academics and first-time-away-from-home parties and tailgaters drove some students to over-imbibe both food and drink.   Add to this mix the opposite sex, and in comes the titles that women chose for each other behind their backs… “queen of the boat,” the “beloved,” and every other jealous term that a woman can throw another woman’s way.  I must say, sometimes the desire to be loved, coveted, and part of a twosome causes ladies to be very unladylike.  We women are competitors.  Warriors when it comes to love, right?  I’ve heard people talk about the MRS degree as if it were a reason to join the Academy.  Why else would we join (wink)?

Enter the eating disorder.  How do you lose weight in an atmosphere like this?  Binge and purge?  Spend your own money on local area restaurant food?  Stop eating?  Purchase supplements or weight loss programs?  Midshipmen tried all of these —some to the detriment of our physical and mental health.  It was rarely so conspicuous that anyone was called out for it.  The greatest form of body dysphoria came during this period of our lives.  Look back at pictures of yourself.  Twenty years later, do you look back at your younger self and still think you were fat?  Most likely not.  Was your body powerful, educated and ready to take on the world regardless of its shape?  Most likely.

Remember this when you mentor the kids going through today.  Men and women.  Yes, marketing to the men has pulled them into the heresy of thinking poorly of their body, too – supplements, protein powders and muscle gaining compounds are a very lucrative business. I urge you to have conversations with our children, our Sailors and our friends that include health, both mental and physical.  The internal struggle, to remain thin and young-looking, eventually catches up to all of us.

Although we learned ethical leadership at the Academy, we struggle with respectful words for our all-powerful, differing body-types.  Fitness and “fatness” are not perfectly correlated, and no matter our age, we need better quality and consumption habits of nutrition.  No one should be driven to lose weight in an unhealthy way  to look the part of a tough, fit, warrior.  In the words of Christina Aguilera, “You are beautiful, no matter what they say…don’t you bring me down today.”