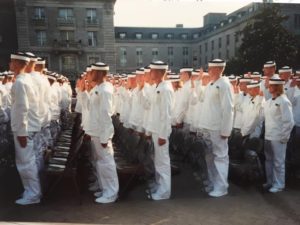 When I tell people I graduated from the Naval Academy and served 6 years in the Navy, more often than not, the response I get is:  YOU?  Really?

On July 1, 1994, I took the oath of office and began my journey at the United States Naval Academy.  I was fortunate to have a good understanding of academy life before I got there since my sister graduated in 1993.   I had spent a good chunk of my childhood on the yard, but I had always been on the outside looking in.   I didn’t realize when I took the oath that for the next four years, living on the inside would feel like living in a fishbowl.  Some describe it as a zoo. The Naval Academy is a military base, college, and historical landmark – which also makes it a prime tourist attraction. Members of the general public attend Noon Meal Formation, listening to chow calls and watching the Brigade march to lunch.

People watched us go about our daily life, all dressed up with too many places to go and not enough time to get there.  There were times people photographed us or asked to have their picture taken with us. And every so often, you would hear someone say something to the effect of “It’s a girl one!” 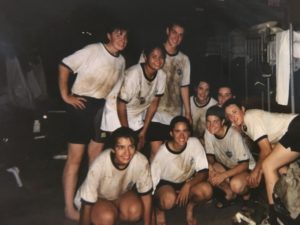 This was the 90’s so only about 15% of mids were female.  We were a somewhat rare sighting, and people were left to wonder what we were like.  Based on what people have told me over the years, the stereotype for a female in the military includes words like tomboy, loud, masculine, brash, bitchy.  I wasn’t any of these things. Although at one point I tried, thinking it would help me fit in. (It didn’t, and I failed miserably.)   We weren’t supposed to like wearing makeup or heels.  We weren’t supposed to be very…feminine… and we didn’t really have time to be while at the Academy. 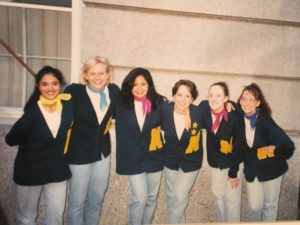 But I happen to be the kind of girl that likes frou-frou stuff. I wear makeup. I get my nails done. I passed my PRT’s but was nowhere near a PT Stud.  I’m the quiet type that always gets dinged for Class Participation. So whenever I met someone while I was disguised in civilian clothes, and they found out I went to the Naval Academy I got the look of surprise.  “YOU? You go to the Naval Academy? I would have never guessed.” On more than one occasion, someone told me I didn’t seem tough enough. I was too soft and feminine.  And feminine meant less. Not worthy, less capable. 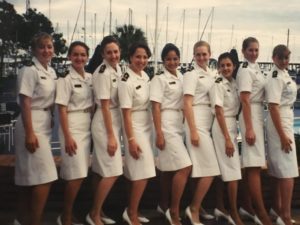 There were even a few people who took it upon themselves to decide I got in because I am a minority female. I think this stung the most because I am the only person in my family that was born in America.  My whole family, and even other Filipinos I encountered in the Fleet, were so proud that a Filipino woman was at the Naval Academy. Yet the very thing I should have been proud of, and often the thing that was my driving force to stay, was also a stigma.  As an 18-22 year old, whether or not I felt like I belonged not only depended on the people there, but the perceptions of the people outside of the organization. Looking back, I heard that tone of doubt so often, I started to believe it myself.  Maybe I didn’t belong.  Maybe I shouldn’t have been there. 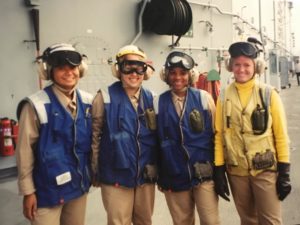 This doubt carried over into my years as an Officer.  So after my time was up, I left the Navy, put the uniform away and put my Navy days on a shelf, rarely to be revisited or talked about.  I went to work in the private sector and later, stayed home full time with my children for a few years.  I definitely didn’t volunteer that I graduated from USNA.  If it came up, I glossed over it because I knew I’d see the surprise again, and I felt like I didn’t represent the “ideal” female graduate. 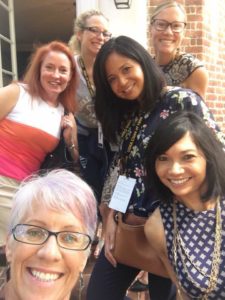 But what is the ideal?  It took me some time away from the military to see what the ideal graduate really is – whether or not you stay in the military.  As I encountered fellow graduates in the “outside world,” the common trait I found among us was selflessness and the desire to serve a purpose much greater than our own.   Not only do we get the job done, but we take the extra step to ask “How can I make this process better?  How can I improve the effect this has on others?” We are the ones you can count on, the ones who follow through. We are the ones who do the right thing because we have a higher concept of duty and we do not question whether or not we will get the credit. We know what to do…even when we don’t, meaning we will figure.  It. Out. (Darn Garcia). And when things are FUBAR, we know when to just say “Roger, out” and move on to somehow find a solution, rather than find blame or excuses as to how we got in that mess.  And for any of the previously mentioned cases, I don’t think it matters if you wear makeup, high heels, or happen to be on the soft-spoken side.

Whether in the wardroom or boardroom, cockpit or pulpit, office or bridge, the “ideal” graduates are the ones who consistently step up to the plate and raise the bar.   These successes are not just of Admirals and Senators – they are found in the places we live, work, worship and serve, every day and at every level. 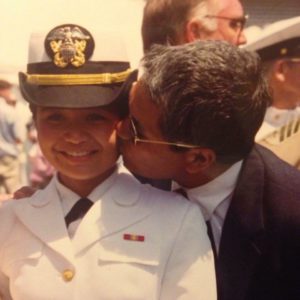 So, if these are the ideals and what defines a USNA graduate, then yes.  I went to the Naval Academy and served 6 years in the Navy.  Surprised? You won’t be after you get to know me.