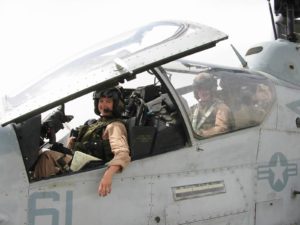 I’d like to tell you a story. It’s the story of choices, expectations, and of the construction of the world around us. It’s the story of how we see the paths we take and the forces that shape our decisions. It’s also a story of promise and of the strengths of different perspectives. It’s my story, and I hope it resonates. 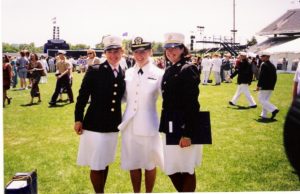 I’m a member of the great class of ’98 from Annapolis, and I was commissioned as a Marine, later becoming a Cobra pilot. Like many of us, I wanted to be challenged, to lead, and to prove myself – all in a meaningful way. The Marines seemed to be the perfect fit, and flying Cobras was my passion. 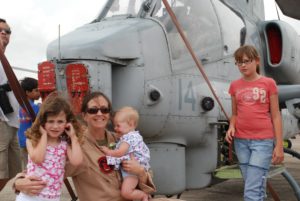 But about a decade into my career, I left active duty and the career that I loved after struggling (and spectacularly failing) to raise my daughter alone for most of the first three years of her life. My husband, also a Marine, was deployed for most of those years, and my family – at the time still recovering from Hurricane Katrina and 2,000 miles away – couldn’t help out much. I didn’t want to leave active duty. And I didn’t do it without a drawn-out fight inside my heart and head. But I remember well the day that I realized with total certainty, driving onto base with a crying toddler in the backseat and tears of exhaustion running down my face, that I was either going to crash the aircraft with a student in the front seat or crash the car with my daughter in the back. There was no one to talk to, to model, to vent to or bounce ideas off of. No one to listen or advise. So, I gave up and dropped my papers. I stayed on (barely) in the Reserves, mostly out of fear of surrendering my identity in full, but I considered myself a total failure. I was hurt, angry, and exhausted for a long time after that.

And after an encounter with a more senior officer on the day I quit, I also felt really stupid.

The day that I resigned my commission, I ran into my former commanding officer. Upset, I told him that I was getting out and couldn’t hack it. He gave me a half-smile. “You know, Jeannette, as soon as you had a baby, the writing was on the wall,” he said. “It was just a matter of time. I saw that coming. You’re a mother now, and that’s your job.” 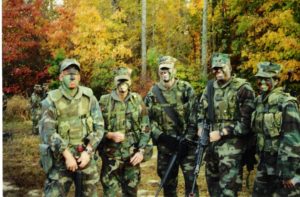 His comments, instead of comforting me as they were likely meant to do, shook me to my core. They made me feel stupid and angry at the waste – the waste of my time and energy and of what the Marine Corps had invested in me. The waste of my years of work and deployments. The waste of the days that my daughter had been raised by others or had ended up in crappy day cares because I’d been desperate for coverage. Why had I bothered pushing so hard, compromising her safety, wringing myself dry only to still fail in the end… if it was all pre-ordained anyway? Was this a narrative that I had somehow missed or ignored in my ambition? His comments – like so many others I have heard before and since – stripped me of my identity and choices and rendered me powerless. I was no longer worth investing in. But why? 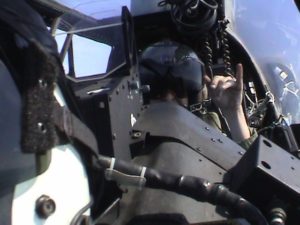 I thought I’d done the right things: I’d deployed and earned leadership and instructor qualifications. I was a night instructor, flying with boot pilots on NVGs until my sixth month of pregnancy. I had child care lined up to deploy since my deployment would overlap with my husband’s, had my daughter in and out of child care homes of all varieties (and qualities), and had barely lived with my husband for the past ten years. I thought I had made the needed sacrifices and the right choices. And none of it had mattered, because I was a mother – and that was all that the Corps was willing to let me be. I began to believe that he was right, that the writing was on the wall, and that I had been stupid and naïve for trying.

The Marine Corps as an institution agreed with him. Child care hours didn’t line up with working hours, and availability and quality were hit-or-miss – so as I rushed out to pick up my daughter before the on-base facility closed or before the off-base home charged me extra, the institution saw me as a burden. A senior officer commented that it must be nice to “prance out early every day” as I ran out to pick up my infant daughter, and my next fitrep reflected that perspective. No other pilots were solo-parenting – so when OPS repeatedly changed the rough schedule at the 11th hour to add me onto consecutive late night flights, they didn’t consider the child care scramble I repeatedly made. And not one Marine in my chain of command checked on my mental health during those three years, even knowing that my husband was in Iraq or afloat for most of that time. The institution wrote me off just as my former CO had – and I got that message, loud and clear.

But I reflected on his words over the coming years, and I started graduate school and writing in an effort to understand my experiences as a Marine, a woman, a veteran, and, yes, a mother – all within in the context of war. Over the next decade, I earned my Master’s and my PhD studying conflict and how gender and culture shape our decision-making processes and – importantly – outcomes. And I began to see my CO’s words differently. I started to see them as transparent, as a framework or a structure that I could push on. And I started to see how big the effects of that structure were. It wasn’t just me or Marines in similar situations who were losing out. The Corps was losing, too. So was America. So were we all. And those losses had effects. 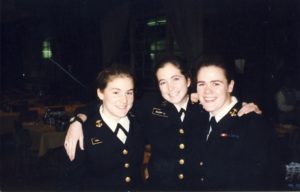 Through my research, I began questioning and studying the construction of institutions, structures, and the norms that shape them and us in new ways. I examined how policy and culture affected outcomes, and observed their very real impacts. And in pushing back, I began to see an infinitely malleable and imperfect world, one that I have always been able to shape but hadn’t truly realized that power. I discovered that the adults in the room are no better or wiser than any of us – and that sometimes all it takes is a voice speaking up. I will retire from the Marine Corps this fall, after ten years’ active duty and ten years as a Reservist… and one final year on active duty, that I have spent trying to build a case within the Corps for a more strategic vision for talent management for warfighting effectiveness and decision-making. My career has come full circle in a very meaningful way. What, again, was written on that wall?

Last fall, I sat across from a younger woman, telling this story to illustrate how inflexibility and a lack of creativity hurts us all – and she added the exclamation point. As I recounted my former CO’s quote about the writing on the wall, she slapped the table between us. With her younger eyes, she saw right through it. “If it was written on the wall, it was because he wrote it there, that [expletive]!” she exclaimed. And she was right. He wasn’t an [expletive], but he had certainly written it on that wall for me. And the Corps had nodded benevolently alongside.

Well, about that wall…it’s turned out not to be a wall at all – at least not a solid one. And the only thing it says is what we want it to. It doesn’t define us. It doesn’t create our choices. Many may try to make it hold us back – but as women, and particularly as leaders, we must remain committed to questioning, to pushing back, and at times to rejecting these frameworks that we might not even see. And that knowledge demands an entirely new perspective – one of leadership and openness.

I’ve thought many times about how amazing it would have been if someone on the other side of that wall had reached a hand through and told me what was possible. It didn’t happen for me at the time. But it can and it should happen for us all – the lessons I have learned are common to so many of us on this path. I want my story to add to the foundation that we all climb from. I want those who follow to be better, wiser, and braver than I am. I want us all to push back.

Being part of the Sisterhood of Mother B has shown me not only that we can be the women we needed as plebes, but that we can also be the women we need now, for each other and for those who came before. It isn’t too late – in fact, it’s perfectly timed. Our voices carry weight. What we say and what we do matter, and people will listen. The framework isn’t what we thought it would be – it’s so much less and we have so much more agency than we think we do. We can write on our own walls. Those rules and expectations that come from those around us are transparent and malleable… and we can choose our own words.

13 thoughts on “The Writing on the Wall”