Rudy takes up a majority of my time and energy, but spring is sort of here, and I need to be outside, at least sometimes. Every year, I plant a garden. It’s not usually anything spectacular, but I enjoy doing it, and there’s really nothing better in the entire world than a Jersey tomato. With all the extra time I have in the near future and all the uncertainty surrounding food shopping, I planned to beef up my garden. I have a tiny yard. Like 100 square feet tiny. A lot of it was taken up by pavers that made a little walkway from my back door to the driveway, so my first job was to pull all of them up to make room for more vegetables. I can’t eat pavers.

I still had some leftover seeds I bought last spring, saved some seeds over the summer and fall, and got some more seeds from a friend, so I felt like I was ready. During the few days that the virus became a real thing and everyone was out buying all the world’s toilet paper and hand sanitizer, I was measuring my yard and drawing pictures and researching itty bitty gardens to maximize what space I had. It was time to grow as much of my own food as I possibly could, then learn how to make it better for next year. I repurposed some leftover bamboo floor boards into three raised beds, each about a foot high, so I was going to need quite a bit of dirt. 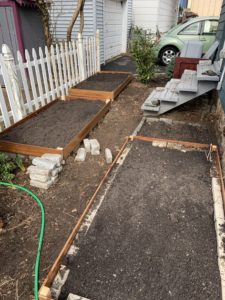 Being a cheapskate even when I am gainfully employed, I don’t want to spend a whole lot on anything. The fancy potting soil is pricey. Top soil is dirt cheap, but lacks the nutrients the plants will eventually need, so I’d need to buy some expensive stuff, a lot of cheap stuff, and find some free stuff. Under the cover of darkness, I stole the two bags of yard debris that my neighbor was kind enough to bag up and put out front for the town to collect. I dumped them in my garden beds to fill some space so I wouldn’t need to buy so much dirt. Turns out, there was also a whole lot of debris in my own tiny yard, so that all went into the garden as well. Cardboard. Junk mail. Food scraps. Napkins. Old burlap. Coffee grounds. Anything that would create volume and eventually degrade went into my garden underneath the thick layer of cheap topsoil and cheap bagged compost/manure.

When I was satisfied with the amount of soil, I planted seeds. I’ll usually use (or reuse) one of those commercially available seed starter trays and start all the plants indoors, then when the seedlings are big enough and there’s no more danger of frost, plant them outside. This was the first time I’ve ever planted seeds directly in the ground, so I was nervous. Looking ahead at the weather, I knew there probably wouldn’t be any more freezing temperatures, but it was still scary. It became even more scary when things with a 3-4 day germination time still hadn’t poked through the surface after a week. I had to tell myself that it’s colder out there than it is in my kitchen. Just be patient. As of today, I’ve seen some cabbage, spinach, kale, carrots, and beets. I’m not a fan of kale, but my neighbor likes it, so I planted it for her.

Rudy was not exactly stuck inside while all of this outdoor work was happening. I saw him pressing his face and paws against the window. Then he started with this sad, pathetic meowing, and I felt kind of bad, so I set up a giant dog crate in the driveway and let him supervise. He loved it. He could lie in the sun and see bugs and birds and people and dogs. Sometimes, he’d be lucky enough to catch a piece of grass or a weed that the wind blew toward him and eat it.

This year, I planted only stuff that I seem to purchase most often when I go shopping, either at the grocery store or local farmer’s market. It was SO hard to resist the temptation to plant everything I want to eat, like okra and tomatillos and corn (which I LOVE, but I know it’s very hard to grow), but I was surprisingly reserved and tried to make up for my lack of variety with more volume of string beans and carrots and beets and kale-like greens. As much as I want it to, I don’t expect that my adorable little garden will feed me all summer and into the winter, but it’ll be fun to see how far I can make it go.

Since everyone is stuck at home, I’ve been able to see a lot of my neighbors and chat with them.  I’ve received many, many compliments, but I’m not fishing for approval. I love that people are interested and want to talk about gardens and vegetables and my feline supervisor. I think being able to grow your own food is important, and I love answering questions and offering advice. If my little vegetable garden inspires only one other family to plant a garden while their cat supervises, that would make me happy.

Even though I’m not out there on the front lines, I’m doing my best to stay home to keep myself, my neighbors, my friends, and my family healthy. If sharing photos of my dopey cat and my tiny garden brings a smile to someone’s face, even if it is just my mom’

1 thought on “Emergency Gardening with Rudy”