Recently, Kate shared her experience with our first Twitter Troll.  I get an email when someone sends us a direct message on Twitter, and when I saw “Can I know you?” my first thought was “Ok, here we go.” Thankfully, Kate was already on it and messaged all of us on Facebook, giving us the play by play with screenshots as the conversation unfolded.

My initial reaction was like Kate’s: ‘Please don’t send a dick pic.” We emoji laughed.  I admittedly said I wasn’t sure what to do, but my thoughts were (in this order):

1) Creep
2) Ok, this is making me feel uneasy
3) Maybe just ignore him
4) Wow, he’s persistent
5) Just get off of messenger and block him!

I imagine this train of thought may sound familiar to some of you.  I think there are other women who have had the same thoughts while dealing with inappropriate situations with men; first, we question if this is really happening, we politely try to downplay it, then we try to ignore, and finally we think we are taking the high road by just getting out of the situation (hopefully) unscathed. 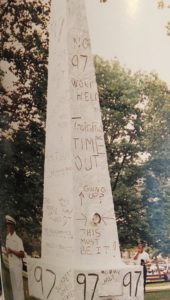 I personally have been through this exact thought process before.  Multiple times in fact. One of those times was during Herndon.

I never made it very close to the monument itself. I was in the sea of people on the outskirts, supposedly providing more support for the base. As I stood there smooshed between my classmates, I felt a hand on my back.  Hmm, that feels different, but not too weird since we are packed in so close I can barely breathe.   The hand moved around and tried to get underneath my waistband and in between my legs.  Bam! I shoved my elbow as hard as I could at someone behind me. A short while later, he tried it again, and he was met with the same resistance.  I glanced behind me, and while I don’t remember his name, I know his face. I am pretty sure I know who it was but with so many people around, maybe it was hard to tell.  Anyway, honestly I’ve been over it. Or so I thought. Then, I watched Dr. Ford’s opening statement.

There is a point in her statement where she describes running out of the house after her horrific incident.  I sat on the edge of my living room couch with my heart beating fast, hanging on her every word as she talked about how she remembers standing in the street and feeling….relieved.  What? She wasn’t terrified? Angry? She was almost…grateful? Yes. Because it could have been worse. And then it hit me.

This is the trap many of us fall into, isn’t it?  Well, he didn’t actually rape me. His jokes make me feel uncomfortable, but it doesn’t happen that often.  Or, in my case, at least his hand never made it to its final destination. That’s why I never said anything.  In my mind at the time, it wasn’t a big enough deal to report it. I was an 18 year old girl in a predominantly male institution.  It happened during a long-standing, revered tradition – a rite of passage. Nothing actually happened. But something did. Someone saw another person trapped, in pure daylight, in a crowd of people, and tried to take advantage of the situation.  What did this guy do behind closed doors? Has he done something worse since? Even if I didn’t report it, couldn’t I at least have confronted him? Nah, my 18 year old self didn’t think it was worth it.

I’m not sharing this because I’m angry at him, which I am not.  This isn’t about placing blame. We at the Sisterhood always try to think, “If we share this, how can it be helpful”?  Well, I’m sharing this because I hope it gives people some perspective. I cannot answer exactly why, but it’s just not that easy to say something.  Something that is embarrassing. Something that no one may believe. Especially when the odds are stacked against you. In these close call situations, the initial reaction is relief, so is this really worth addressing? The answer is yes.  The other part of the answer is that it won’t always be easy, but we have to try. 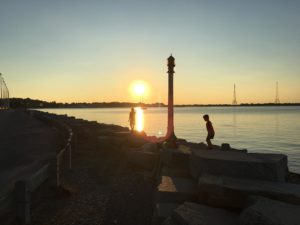 I’m talking about challenging these types of situations during everyday interactions in our communities.  In one of my previous jobs, when a new woman reported to the office, my male worker said “I hear the new girl is pretty,” and snickered with my other male coworkers. I replied “Yes, she is.  She’s also very smart and professional, which you should also know. I think she is going to do really well in this job.” We need to start changing the conversation, calling things as we see it.   These small interactions count, because our friends and children are watching. Just like I watched Kate handle our Troll so eloquently and professionally – while standing up for herself. Well, actually, us.  So thank you Sister, for setting the example. It inspires me to do the same. Little by little, we will turn this tide. Together.

5 thoughts on “Turn the Tide”