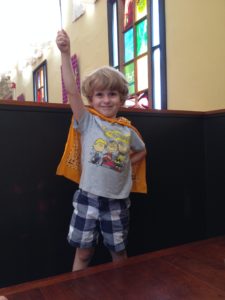 A few days ago, my son came home from school with a story that sounded, at first, depressingly familiar. He is eight, and his ability to process information and express his feelings is still raw and forming. Getting an insightful thought out of him takes patience and creativity – not because he doesn’t have thoughts like that, but because he is still developing the tools to express them. His story – particularly the surprising and hopeful twist at the end – reminded me that his waters run deep and that, like my daughters, he is soaking up information and learning constantly in his own way.

The story and its conclusion caught me by surprise since he relayed it casually after dinner. It wasn’t a remarkable event to him. It didn’t warrant mention during our normal early evening family conversations. It didn’t occur to him that the story symbolized anything other than a normal kid interaction on a playground at recess. Which, of course, is part of what makes it so poignant – it shows how deeply he has considered the messages that my husband and I have tried to impart on our kids.

At recess that day, he was playing kickball with a group of kids – primarily boys with a few girls. One of the girls on his team kicked a home run, sending herself and her teammates racing around the bases. As she ran back over home plate, triumphant, another boy on the team, a friend of my son’s, told her, “That was pretty good … for a girl.”

Had the story stopped there, I would have sighed and remembered every time I heard that line. “Pretty good for a girl…” or “pretty ballsy for a girl…” or a version of the one I heard during my years flying in the Marine Corps, “Well, if we had to have a girl, at least you don’t suck.” I doubt there are women alive who haven’t heard versions of these comments. 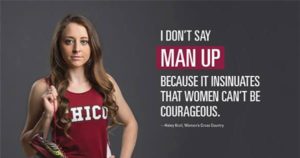 But his story didn’t end there. My son reached out and stopped his friend, saying, “No – don’t say that. She kicked the ball pretty good for anyone, boy or girl. You shouldn’t talk like that about girls – my mom wrote a whole dissertation about it!”

My heart just broke open at that. No, I didn’t write a dissertation about women and kickball, but I did write about the many negative impacts that gender inequality has on security, outcomes, and on individual men and women. And we have a lot of conversations in our house about stereotypes, what’s real, what’s possible, and what kind of messages society sends us. My son was listening – and he was understanding. We’d never spoken specifically about kickball or playground games, but he projected those lessons onto that situation by himself. He realized that his friend’s comment wasn’t just wrong, it was harmful and needed to be addressed. 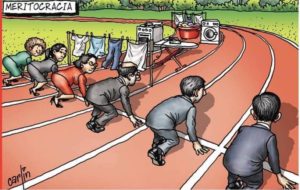 I gave him a giant hug when he finished talking, not just because he had learned that it was wrong to stereotype and insult with stereotypes, or because he actually applied that lesson to a new situation, but because he immediately spoke up. He saw it as his job to advocate for the girl on his team and to point out wrong. And the story came out accidentally, as an afterthought. He mentioned the incident in passing. He didn’t even think it was a big deal.

That’s what struck home for me. He had gotten the message. He realized that he had a role to play in this situation, and that it was his job to speak up when he heard something wrong. In that moment, my kid – the one I am probably most likely to underestimate given his age and emotional IQ at this time – became an advocate for others.

Which takes me to my real point.

The Sisterhood of Mother B is a fantastic entity. It has grown to be my support group, my network, and my sanity check. We come to the table with different memories and perspectives, and we don’t all agree on anything – except that progress is important and that we are here for each other and our USNA sisters no matter what. It’s truly amazing to learn how many experiences I had as a mid, a Marine, and a helicopter pilot that I thought were mine to bear alone – but were actually common to many. To call that empowering is an understatement. 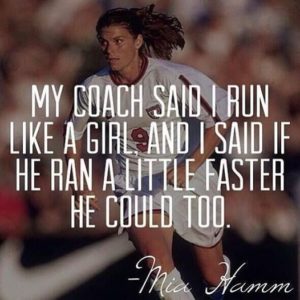 But being united as women and advocating for each other – while necessary – will only take us so far. It’s like kicking a home run only to be ignored by the team, or worse, picked on by most of the participants for the stupid way we run. For real change to happen, for the culture to change, for attitudes to shift, and for us as classmates and alumni to support each other and build a world where a Sisterhood isn’t needed anymore… we need men to join us. We need the voices of our male classmates to complement our own. We need our sons to stand alongside our daughters and point out where the culture fails us all. We need fathers to ask for and use paternity leave. We need male commanders to consider child care a parenting issue, not just something for mothers to figure out. We need men to point out to other men where stereotypical expectations limit their female colleagues. We need male executives to make it a point to commit to family time. We need men to speak up when women are objectified. We need male military, business, and community leaders to advocate for women and mentor women just as they have men. And we need men to be our partners – not simply because men have wives and daughters, which can illuminate new perspectives – but because we are all human beings. 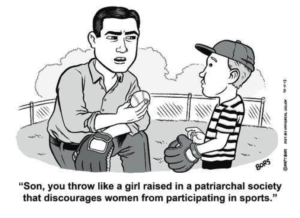 Classmates, friends, fellow grads: join us. Real change will never happen without you. It’s not just about women’s rights and equal opportunities, which are important enough in their own right. It’s about transformation – the kind of change that can reshape the world and the future. This is your world, too. It’s your future – and your children’s future. This is about creating a better world while it’s still ours to create. It’s about outcomes, security, stability, and prosperity. It’s about what is possible when kids like my son take a stand and reach out to others as partners.

So gentlemen, please join us. We are reaching out to you, and we cannot do this without you.