“I’ll never fit in. That’s one of my best qualities.” – Terri Willingham

I’m a Third Culture Kid (TCK).  For those who don’t know the term, a TCK is someone whose childhood years were affected by multiple cultures. Most of the time the term is used for kids who are expats and spent much of their childhood moving from one country to another.  But I didn’t. In fact, my parents still live in the same house I grew up in. 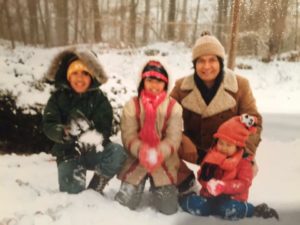 I’m on the far right, and apparently a big Tigger fan 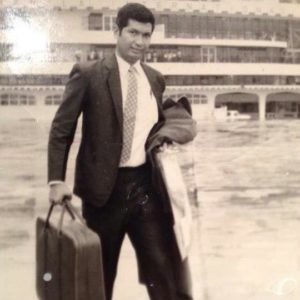 My dad boarding the plane to America, 1970

I’m a TCK because I’m a first-generation immigrant.  My parents came from the Philippines in 1970 and I’m the only natural born citizen in my family. So we had our American life on the outside, our Filipino life in the inside, and I operated somewhere in between. We lived in a predominantly white neighborhood; in elementary school, kids asked me if I was Chinese, Japanese, or Black. Older kids would yell “Chink” when I walked through the school hallway.  No one knew what Filipino was, or at least that’s how I remember it. Maybe that’s just because these are the memories that stick with me. 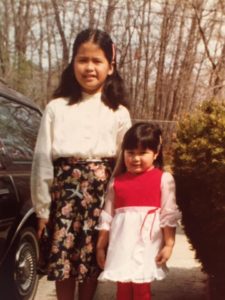 My sister Anna and I in 80’s fashion

I remember bringing a tin of Barquillos to a school Christmas party only to have it left untouched, so the next party I begged my mom to make peanut butter on celery sticks instead.  I remember feeling uncomfortable having to call my sister “Ate” or my brother “Kuya” out in public because I didn’t want to have to explain it was “Tagalog”. I can remember the waiter’s face when he couldn’t understand my parents’ orders because of their accent. I can still feel the embarrassment, the guilt of feeling embarrassed, and the anger of wanting to punch the waiter in the face.  I remember feeling conscious when my parents made a big (loud) deal of seeing another Filipino family in the grocery store and everyone found out they grew up near each other. Even our doctor was Filipino. For goodness sake, I thought back then. Can’t we just. Blend. IN?

The life of a TCK can be complicated.  It can be lonely since you never feel like you quite fit in.  You want to connect with the people from one side of your life, but are not sure how that will impact the other side.  You worry somehow you will be alienated. You’re not on either side. You learn to live on the outside of your two worlds, moving in and out and knowing how to blend in just enough.  Sound familiar? Yes, it’s not unlike being a female midshipman (in the 90’s at least). 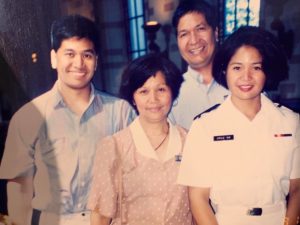 Plebe year in the Chapel

The traits of a TCK served me well in some ways while at the academy.  TCK’s can easily adapt. They make acquaintances easily. They are skilled at flying under the radar so nobody will notice them.  The downfall is deep connections are harder, and that, in particular, was vital to my well being at USNA. It’s not that there weren’t opportunities to connect.  I vaguely remember networking opportunities for female mids only (Sharon Disher ‘80 spoke at one). I think there was an Asian American Club and a Filipino American Club.  But my memory is faint because I never took full advantage of these potential support networks. Some small part of me felt like participating in these minority groups meant I needed them, and if I needed them, then it meant I wasn’t good enough to do this on my own.  Perhaps it was the little girl in me (the one that wanted to punch that waiter in the face) trying to say I can do this and I belong. 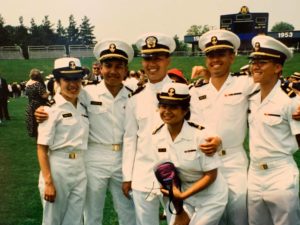 Here with my sponsor brothers and sister (there were more!)

I was adopted by a Filipino sponsor family that took me in along with other Filipino midshipmen.  Ironically, I had spent my whole childhood feeling out of place, and yet among other Filipino mids I felt too white! It was my own insecurities keeping me from making better connections, but I will be forever grateful for their generosity. However I look back on that time with a twinge of regret.  Regret that I did not build on the support network that was laid out for me. Regret that I felt so much like I had to blend in, that I let go of some parts of who I really was. 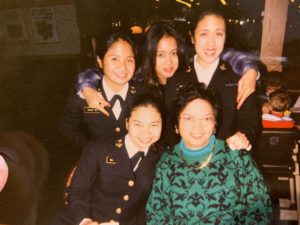 Here with my sponsor mom and sisters

I’m not alone. Since the creation of Sisterhood of Mother B, other women have written emails or comments echoing these same feelings of wishing they had done better. We can’t change the past but we can certainly influence our future. And let me tell you, as a “double” minority, hiding our differences and huddling in smaller groups is not the way ahead.  My parents had it right all along: be proud of what makes you different. Share those bizarre traditions because everyone’s got them, trust me. Seek out others like you and support them – loudly. Advocate for one another. Look for others who are earlier on their path and lend a hand. Help them make better choices and give them the advice you wish you had known all along. Be open about struggles you are having, because others are going through the same thing. But lastly, and probably most importantly, if you are reading this and you are still at the point in your path where you aren’t ready or sure how to reach out – it’s ok. I see you. I’ve been there, too. It took me some time, and when you’re ready you’ll know. We are here waiting. 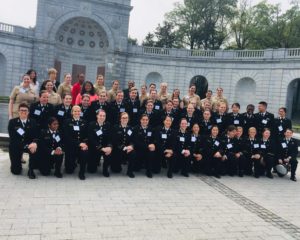 Midshipmen past and present ‘80-‘21 at the Officer Women’s Leadership Symposium, April 2019